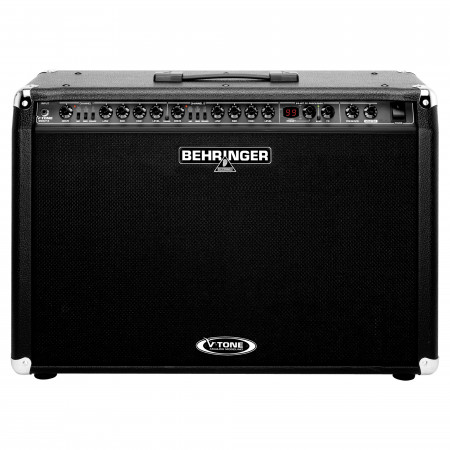 The V-TONE GMX212 may look like a single guitar amp, but by flicking a few switches, it actually gives you access to a multitude of totally different amp voicings. You also get 99 effects presets in stunning 24-bit stereo sound. Plug in your guitar and let your tone odessey begin.

A Virtual Roomful of Gear

The 2 x 60-Watt GMX212 is the perfect amp for the guitarist in need of a wide variety of tone. Take your pick of three amp voicings: TWEED gives you the soulful, bluesy sound of vintage 50s amps; BRITISH gives you the hard-rocking sound of the 1960s British Invasion; CALIF gives you the sparkling clean tones of the American West Coast's most famous amps. Combine any of these modes with three speaker voicings: UK simulates 4x12" speakers in an enclosed cabinet; US simulates 2x12" speakers in an open-back casing: FLAT is a special setting designed especially for the GMX212's 2 12" BUGERA speakers.
Select from CLEAN, HI GAIN or HOT gain settings to go from clean to heavy overdrive, then apply one of 99 digital effect presets for a sound that's uniquely yours. There's even an onboard tuner! Meanwhile, our patented DYNAMIZER circuitry captures every nuance of your playing, lending warm tube-like compression to your tone.

Its tonal options may be vast and sophisticated, but at its core the GMX212 handles just like a classic guitar amp. Plug into the 1/4" input jack and then take your pick of two channels, each with GAIN, LEVEL, and three-band EQ. You can use the included footswitch to toggle remotely between the two channels – go from clean and reverb-drenched to distorted and delayed at the touch of a button. Put the finishing touches on your sound with the PRESENCE and MASTER dials.

We have given the GMX212 an extensive back panel for even more sound routing options. There you will find a loudspeaker output for connecting an additional speaker cabinet, a headphone output with speaker simulation, an adjustable AUX IN for devices like drum machines, and an RCA INPUT allowing you to play along with a CD player. There are stereo RCA and line outputs with speaker simulation for direct recording. An additional 1/4" jack connects to external effects devices. Plug a MIDI controller such as the BEHRINGER FCB1010 into the GMX212's MIDI IN for even further remote control over the onboard effects.

The GMX212 provides an incredible tonal palette at a fraction of the cost of collecting vintage amps and effects. Complement your creativity with the sounds that made the electric guitar the renowned instrument it is today. Check out the GMX212 at your nearest BEHRINGER dealer.