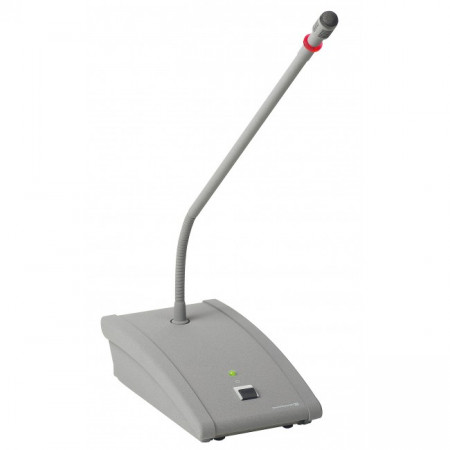 The MTS 67 is a desktop microphone unit with many different functions. Depending on the application, it is possible to choose between three operating modes: ON/OFF, Push-To-Talk (PTT) or Push-To-Mute (PTM). The different functions are controlled by a micro-controller. Furthermore, the frequency response can be tailored for use in three modes: linear, 90 Hz bass roll off, 150 Hz bass roll off.
The MTS 67 is switched on and off with a silent microphone button. An LED in the housing and an illuminated ring around the gooseneck microphone show the ready-to-talk condition. The MTS 67 is ideal for discussions, tele/video conferencing and announcements.

The MTS 67/5 version is available with a remote control i.e. the microphone can be operated with an external control contact and as a choice the built-in microphone button is switched on or off. An external device (e.g. mixing amplifier for announcements) can be triggered by an Open Collector Control output.

Within the MTS 67/7 the internal switch logic has been removed and the external connections for LEDs or buttons are to connect control systems to the microphone unit for the logic control. Therefore, the MTS 67/7 is ideal for applications with media control systems or paging systems